We didn't blog about it earlier, but a few weeks ago we had a romantic 4D3N getaway to Phuket without Ethan. He stayed with Renata's parents and we almost cried when we left him in the early morning. We told him that it's actually for his own good that mummy and daddy spend time alone together.

The first day felt very strange and free... no baby to constantly think about. We enjoyed the freedom and missed him all at the same time. We stayed at this lovely and very reasonable place called Naithonburi Beach Resort . We love to go in the cheap off-season so they only had a few guests. 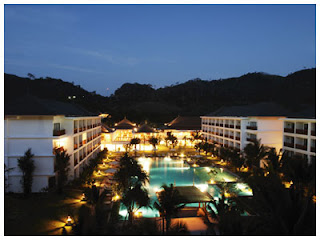 Renata hasn't ridden on Ivan's bike since getting pregnant, but we rented a scooter on one of the days. This fun little automatic scooter cost us about SGD$12 for 1 full day. Renata even tried riding it all by herself - first time on scooter! 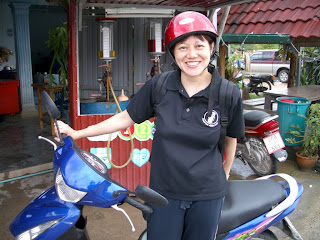 Then Ivan took over and the 2 of us roamed the Phuket coast line taking a long ride up and down hilly roads, stopping at shopping places and roadside pad-thai in order to get to this snazzy restaurant that was well-rated. It's called Ratri Restaurant at Kata beach and the food was absolutely fantastic! Not cheap by Phuket standards, but neither very pricey at about SGD$30/pax and one of the most memorable taste sensations we've ever had! They have live jazz playing there too, but they weren't on that particular day we were there. It was great nonetheless.

On another day we took a snorkelling excursion. It's been years since either of us have been snorkelling and it was very fun. When we stopped at one island we were caught in a very blustery rain-storm for 20 min which quickly passed and we were on our way again. That's why it's off-season and our rooms and excursions were so cheap! 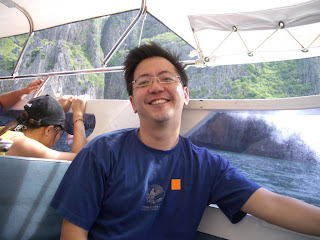 We had a great time in Phuket, spending lots of time with each other and forming new memories that weave us together. Ethan will enjoy a stronger family for it, so though we missed him we would definitely do it again if possible ... thanks grandparents! Ethan took to our excursion quite well, though on the last day he began missing us and wanted to go "home". The smart little baby communicated this by leaning towards the bedroom door indicating that he wanted to go out, then strained towards the stairs, then leaned toward the front door of the house, and reached out for our car. When he saw that the car was empty he settled down, realizing that he had to wait one more day for mummy and daddy to come home!
at 12:31 pm