Ethan loves his train toys! Yesterday we had a huge train party and today he rebuilt Te tracks. This is another rebuild with Daddy making a 2 storey overhead and Ethan innovating a long train with multiple engines! The video is taken by the train maestro himself!
at 5:01 pm No comments:

Yet Another Train Journey

Daddy and Ethan took yet another KTM train journey, our fourth thus far. Ethan is now old enough to call it a father-son trip, and was expectantly looking forward to it. He sang about what would happen, how boys would be with boys and the girls would have their own mother-daughter outing.

That day he asked 100 times when we were going to train station. Mum and Talia left for Bollywood-Veggies early in the morning so we had the day together as well. We filled it with lunch at Marche and the afternoon working in Daddy's office before setting off in the evening. 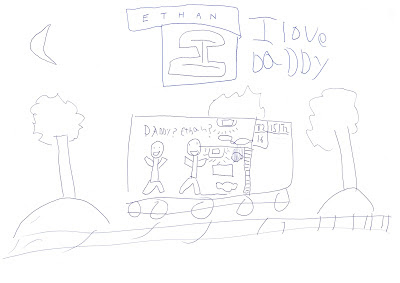 "Daddy, I think this KTM train is nice but it's a little old," he said when we boarded. I assured Ethan that it was the same as the other KTM trains we took but because he had just been on the JR Kyushu trains, the Malaysian ones looked old! 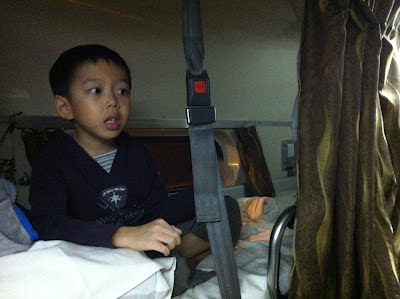 We happily ate dinner in the sleeping bunk as the train left Woodlands at 7.00pm sharp. After chatting, reading, snacking, and exploring Ethan was tired but not wanting to sleep. Fortunately Daddy recognized the symptoms and enforced story and bedtime. After that, all was quiet and Ethan slept till morning. 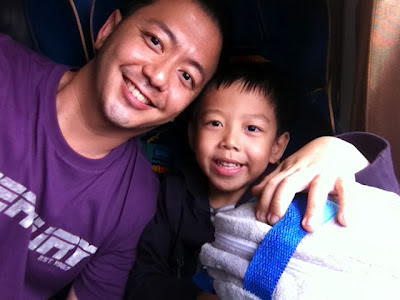 At 6.45am I was awoken with an excited yell, "Daddy, we're still on the train!" This is how Ethan always wakes up the KTM sleeper - happy and bubbly! We munched on biscuits while waiting for our stop. Daddy discovered that our train was an hour behind schedule, so we got off early at Dabong rather than at Kuala Krai so we wouldn't miss the return train home. 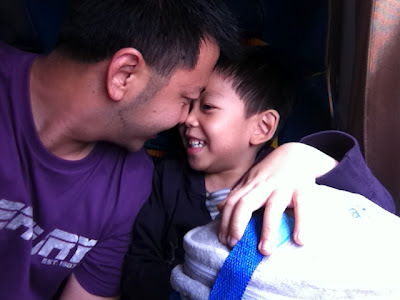 One iced milo, two tea tarikh, and two roti cenai later we were refueled. After restocking drinks and packing lunch we were back waiting for the train. 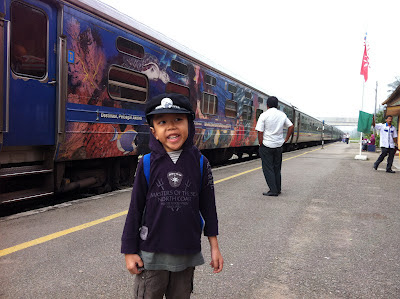 Daddy noticed a new poster for a new train (Malayan Tiger Train) that supposedly started in Jan 2012 running between Johor Sentral an Tumpat. The sleeper berths are a new design and they look nice. Daddy will have to check it out for a future train trip. Since we are getting quite accustomed to these trips, we also need to raise the bar a little. Daddy is thinking about bringing the Brompton, cycling around and staying in a simple hotel for the night before catching the return leg to Singapore -- two nights with cycling and trains!! 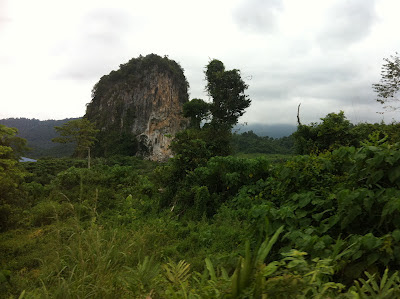 We are now enjoying the scenery aboard the train. Lots of interesting rock formations rising out of the tropical rainforest here in northern Malaysia. It's almost time for our nasi lemak lunch, though Ethan has been snacking so much that we are both quite full. 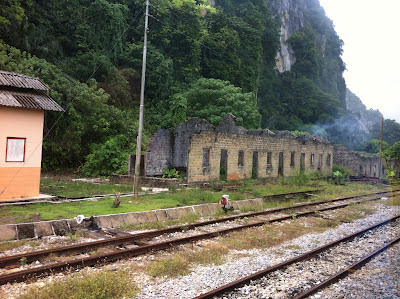 I just discovered that JR Kyushu donated these decommissioned trains to Malaysia. I would have taken this on this recent trip if I had known. Will take next time with family. Can go from JB (not Singapore yet) to Wakaf Bahru (Khota Bahru). Great for overnight then homestay or Renaissance Hotel in Khota Bahru! :) Japan also donated trains to Thailand so I gotta figure out whether these trains are running there yet!

If you watch this youtube video all the way to the end, the contrast between the last carriage showing Malaysian culture and the rest is quite funny! :)  http://www.youtube.com/watch?v=jqJrIdXXPK8&feature=youtube_gdata_player

Earlier today I discovered that there is a new train running on this line, the "Malayan Tiger Train.". I googled it after I got home. Imagine my pleasant surprise to discover the train itself was a donation from Japan! To be exact, it is the blue train from JR Kyushu that used to run between Tokyo and Kyushu. Now renamed as the Malayan Tiger Train, it runs on the East line between Johor Bahru and Tumpat! 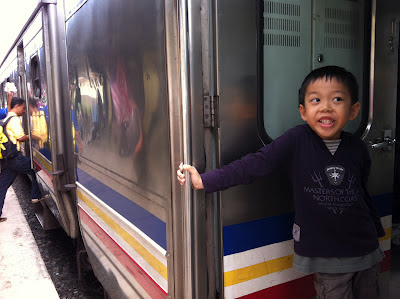 Ethan always has such a wonderful time on these trips, and he is now becoming more aware that his Dadday makes special effort to spend time with him on these outings. I think he is very grateful, though of course he cant express it in words. A super big hug, lots of "I love you Daddy!" makes it so worthwhile. Plus of course we know that we're building strong foundations of memories for the future! 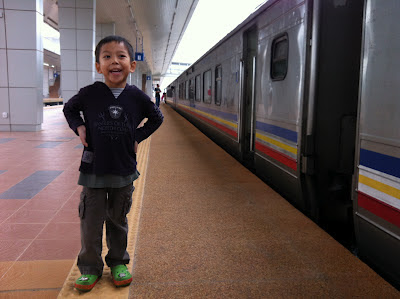 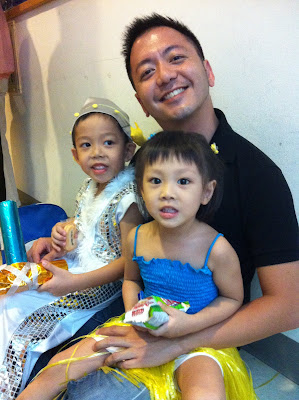 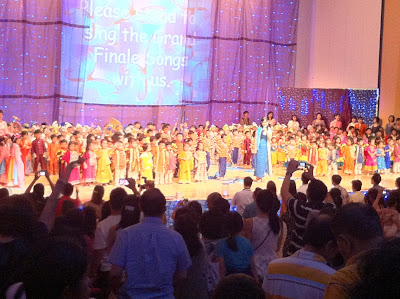 It's the last concert that Ethan and Talia will be in together, as Ethan is off to big boys school next year. The big regular BRMCK do each year. Here is Daddy with his Norwegian Viking Disco Dancer and my Hula Girl.
at 10:52 am No comments: 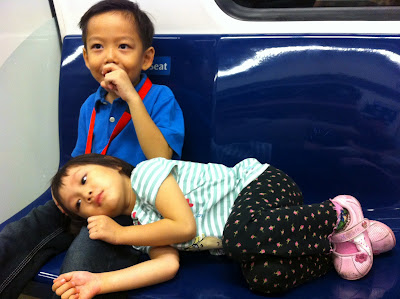 Talia's been very loving and trusting of Ethan recently. She has always been, but especially so the past few weeks and Ethan responds to her so well. It's really wonderful to see our children appreciate one another!
at 10:48 am No comments: 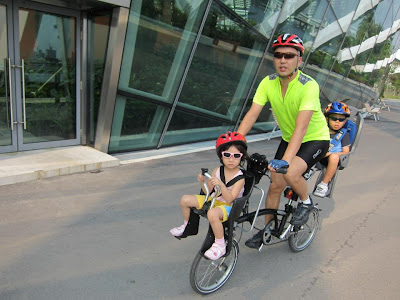 It's been so much fun biking with the kids, exploring all the park connectors and trails in Singapore's burgeoning landscape! Can't beat the Brompton S2L-X's flexibility as a fast bike for myself with Ti seatpost then swapped with all the kid's attachment in 2 min for this fun cruiser! 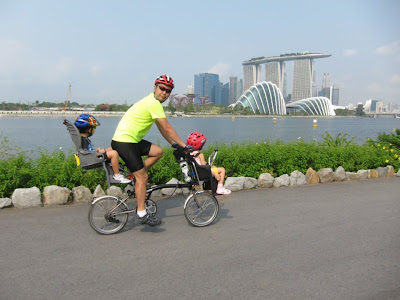 Brompton with Trail-Gator and Front Seat

What a great outing we had at the Punggol park connector! Mei came to ride and photograph us, and we are on our first longer ride with the trail-gator. I wanted to mount it as low as possible on my seatpost. It can't go any lower otherwise Ethan's front wheel would be too close to the ground. I need to shave off some metal from Ethan's attachment brack to increase the angle and allow the mount on my seat post to be even lower. As is, it performs wonderfully after I figured out how to attached to the Brompton fender stays when Ethan is disconnected. I dare say it would be even better than on a "normal bike" as the mount point on the Brompton is much lower and hence more stable for Ethan's bike being towed. Possible improvements are (1) quick release on seatpost attachment to permit better folding/carrying Brompton (2) lowering Trail-gator attachment point by modifying angle bracket further (3) shortening trail-gator by cutting/drilling more metial off the Trail-Gator. 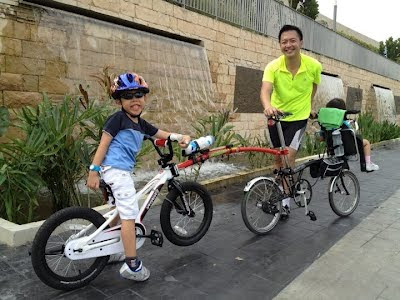 As usual, Talia loves her front seat. It's been more than a year since I fit this together and it's still fabulous. The simple attachment method to the C-bag frame is excellent and the recycled aero-bars make the cheap seat look fantastic! At $35 this customized seat was the best deal ever! Please forgive the lack of helmet for Talia... I accidentally brought the wrong one and she wasn't too happy. Hence my towel on the handlebar for her to rest her delicate head! 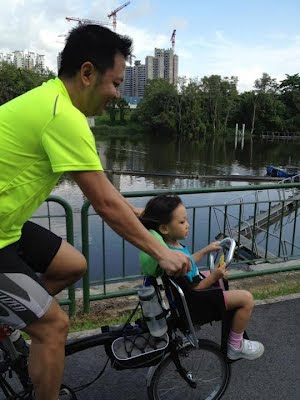 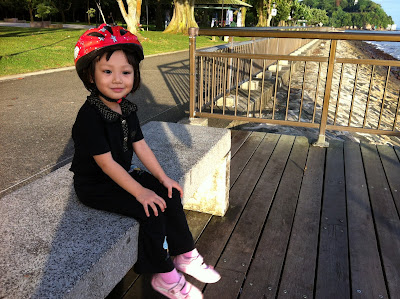 What a great afternoon outing at Labrador Park! Daddy took some mug needed time off after some packed weeks, and we stuffed 1 Brompton and 2 kids bikes in the car. This included Ethan's new bike which he pedals and balances so wonderfully! 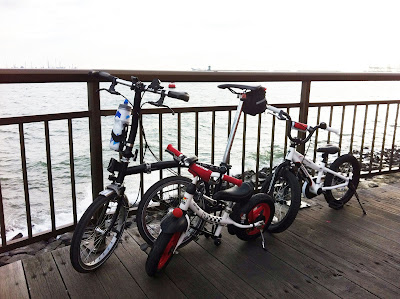 The day included lots of sight-seeing, enjoying the sea breeze, and pretending to be different animals. Ethan and Talia cycled the length of Labrador Park a couple of times and explored the paths aroud the playground and "forest." 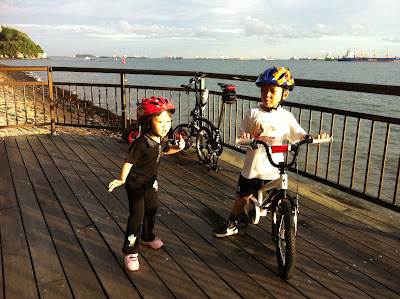 After much cycling we had a picnic of satay and fried rice and Ethan and Talia ate so well, laughing and chatting all the way through! 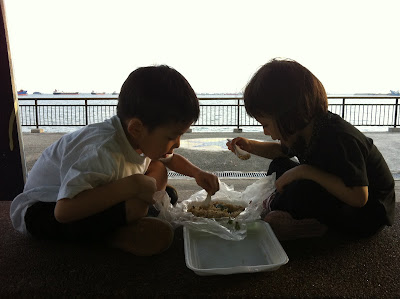 Ethan got his first pedal bike, a Specialized Hotrock 16 with coaster brakes. Daddy chose this one as it has decent components and an aluminium frame to make it a reasonable weight. Lots of time on his previous balance bike has made my cycling son adept at balancing so we started his bike riding career with no training wheels and he has taken to it very well. After a bit of practice of how to get started he is doing very well. This ride is after about half an hour of practice and no falls! Daddy sure is proud!
at 4:06 pm 2 comments: 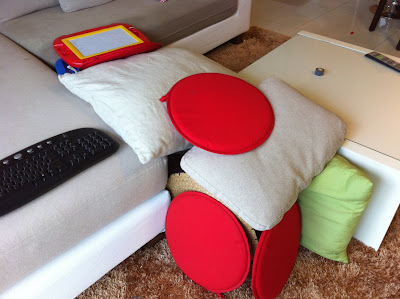 Last night we read the Easter Story at bedtime and I could see Ethan was listening quite intently. This afternoon, he proudly showed me this new cave he had just spent the afternoon building. "It's the cave after Jesus died, Mummy" he explained. Not too much of a stretch of the imagination to see that he had reconstructed the famous "Garden Tomb" in our living room complete with round doors at the entrance and where sisters, Care Bears and other toy animals got resurrected after lying inside!
at 11:15 pm No comments: 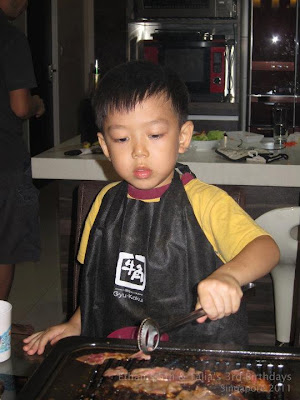 Here is my Junior (Master) chef! He's been wanting to cook on our BBQ for those he loves and finally got a chance when we had Yeh Yeh, Ah Mah & Gu Ma over to celebrate their birthdays. Quite funny to see how he has the same intense look that Ivan has when he is cooking! 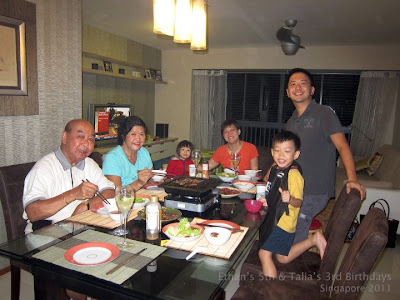 You can see from the satisfied faces of his 'customers' that he did a pretty good job!
at 11:39 pm No comments: