First Classmate Over to Play 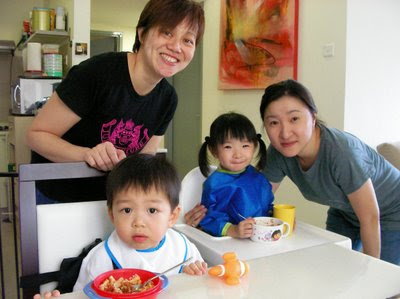 Ethan had his first classmate over to play! Her name is Alina and of course we had her mummy, Adeline, over too. Adeline said, "Alina is always talking about Ethan saying Ethan did this and taught her that!" So we asked Ethan about her and he said, "Alina pretty girl!" That she is and they play really well together too!
It's very amusing watching the different way Ethan plays with Alina as compared to other boys. Our son is quite a gentle creature so he played very sweetly with Alina who is smaller than him (her head actually looks half the size of our chunky son's large one!). They took turns with various toys and even pushed each other around on the Pooh Aeroplane (see below!).
When there are other boys around it gets much rowdier. So even though we had two toddlers playing, it was actually quite peaceful and pleasant and all three adults had their fill of our "day off" lunch - Ivan's portobello mushrooms, asparagus wrapped with bacon, and fresh hamburger patties with rocket & baby spinach salad!
at 11:57 pm

Email ThisBlogThis!Share to TwitterShare to FacebookShare to Pinterest
Labels: Videos