Bali: A Father and Son Travelogue 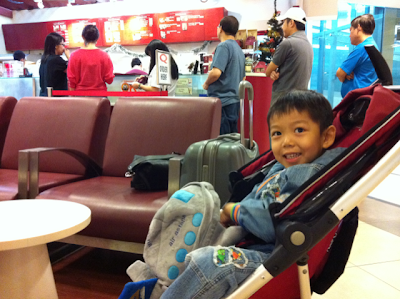 We are beginning our Bali father and son trip. Goo Ma took us to the airport and here we are enjoying Ya Kun before checking in. Ethan is very much looking forward to it, and Daddy is filled with nervous anticipation. 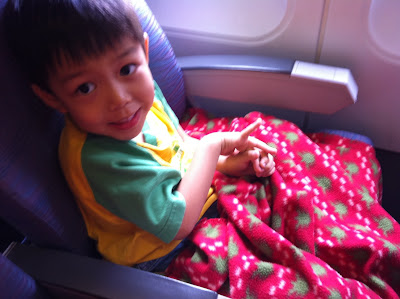 Blankies are the best! Ethan had a short nap before we got on the plane and is now rearing to go. We are taking off now... 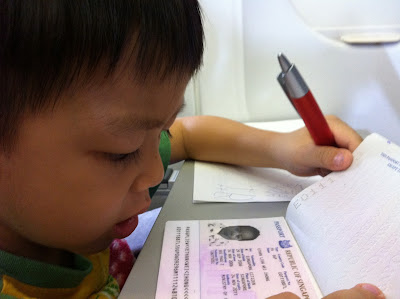 Ethan saw me completing the immigration forms and asked for his passport he could work on things too! 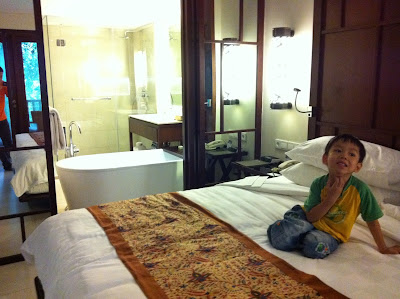 Padmore Resort is a really nice and very big resort! Here is Ethan enjoying the great room. He already said that the bathtub was really nice and while we were walking around looking for dinner gushed, "This is the best hotel ever!" 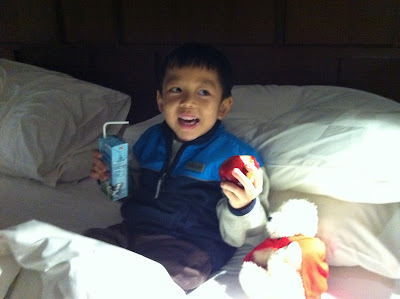 We had a great day which included a quick swim, snacks by the pool and a late dinner with old friends. Ethan loosened up with the older kids after a while and all were having a whale of a time. It was great to see so much warmth and fun and we've only been here half a day!

One year ago Ethan and I did a one night father-son trip in JB. That time the bedtime was hardest. What a difference now! He was such a good boy and listened to everything daddy said. Upon seeing the welcome fruit platter he asked, "Apple! Can I have some apple daddy?" I offered to cut it for him but he likes to munch on it whole. "Do you think it will be nice with the milk we bought today daddy?" I assured him that I thought it would be great, so here he is just before story time and nap time! That's "bear bear" whom he tucked in beside himself by the way... 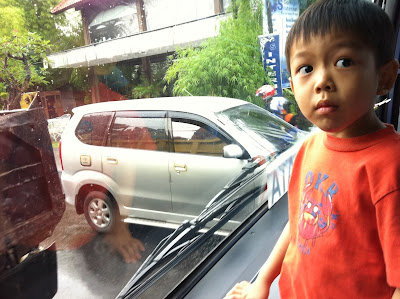 We chartered a big bus today for almost 20 of us including kids. Ethan had a great view of happenings up front and there was even a microphone he could use to make his announcements. He pretended it was a train and that he was the conductor. He kept saying "All aboard!" and "People, we are arriving at Terminal 3!" I'm sure his favorite part of the whole excursion today is the bus itself!

Today was a bit hard on daddy because we travelled a lot with a schedule not tailored to young kids and it rained quite a bit. Overall though, Ethan was well behaved and he slept in my lap while we were on the road taking 2 short naps today. 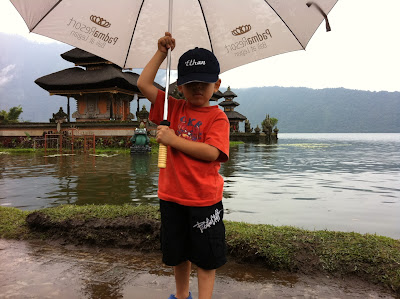 Like I said, yesterday was a bit tough with the rain and a little boy who doesn't like getting one grain of sand in his crocs. He wasn't too enthused with this particular outing but overall loved the bus trip and all the friends. 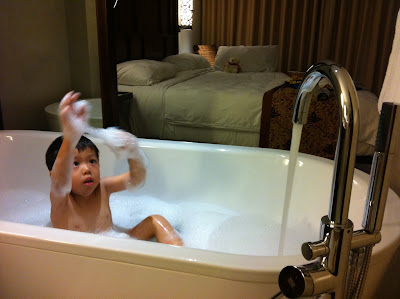 Our room and the standalone bath is really great! Last night we had a bubble bath which Ethan really enjoyed as you can see!

It was a great way to clean up after a long bus outing during which he played conductor, made announcements, and sold ice cream to everyone who would pay "91 cents" for the flavor of their choice. He stopped at one point in the bath, smiled with a look of remembrance and said, "Everyone says I'm a good conductor Daddy!" I truthfully assured him this was so. Though I offered him a swimming day with Daddy the day after, he eagerly wanted to be on the bus with everyone!

Just before the bath I scolded Ethan rather fiercely for not wanting to brush his teeth. The blood drained from his face and he started crying, "I want mummy!" This was enough to terrify any grown man. So I hugged him until he calmed down. Later he said in a very calm way, "I want mummy and Talia." I reminded him that this was a special boys holiday and he sweetly said in a non-complaining voice, "I like my family with everyone." He is very happy with Daddy and j thunk he will go back loving Mummy and Talia even more. I think this is a great thing about trips like this. 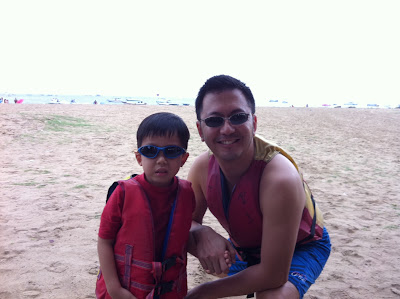 The next morning we did something totally new... Jetskiing! Here we are pictures in our jetski togs. After Ethan complained about sand and diet yesterday, I was a bit worried today especially as it was drizzling and not the sunny day we had hoped for! But Ethan ran on the beak into the water ad hopped onto the "water motorcycle" which is what I told him it was. When we took off he literally screamed with joy and laughter that could be heard over the waves! The overpriced $15 ride for 10 min was worth every rupiah!

After cleaning up we ate home made kueh lapis and Korean strawberry ice-cream. I didn't mind the long traffic jam afterwards as Ethan napped for 1 hour in my arms on the way to a late lunch. 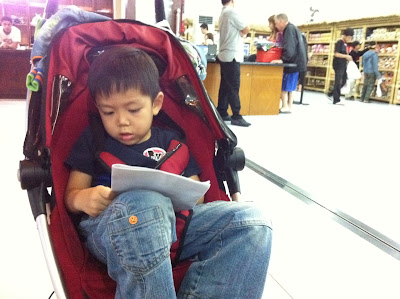 Having dried off from jet-skiing the gang went shopping. Since we have Indonesians in our reunion group we get to go to local places so here we are. We bought 2 big beautiful kites and 2 tiny oil paintings of a cat and dog. Ethan and Talia each get one for play and to decorate their bedroom. Ethan thinks about his sister very often and loves to get things for her. Here he is after the shopping trip superbly entertaining himself with drawing while we waited for the ladies to finish their shopping. 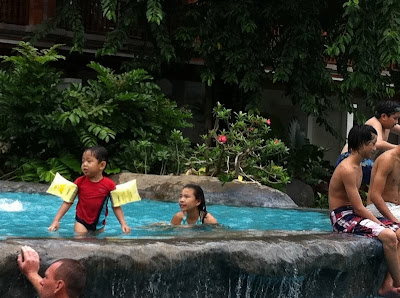 Ethan and I had great fun today. It was the first non-rainy day since we got here so it was a great day for the pool. We met an Australian who went to the same high school as Daddy and Ethan played with their 2 pretty girls. They were both jumping off the ledge into the pool which Ethan tried, but this new feat was trickier than anticipated cos the poor fella jumped straight up instead of forward, landed square on his rump then slid into the water! Howls of "Daddy, my bum bum!" were mixed with my comfort and laughter at this unfortunate accident! 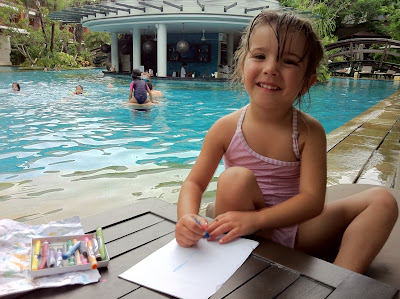 We did some coloring after that and the 2 Aussie girls eagerly joined in. Three year old Hannah was really cute and chatty. I think she took more of a liking to me than to Ethan, and asked me to sit next to her at breakfast tomorrow! 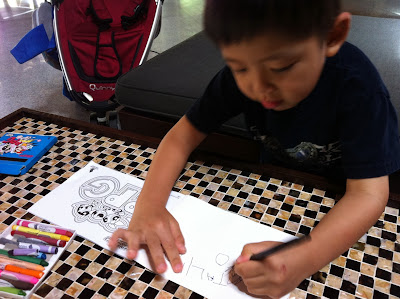 After I checked out of the hotel, I gave Ethan his colouring book to entertain himself. He asked me how to spell "Talia" and after I said the letters he wrote out his sisters name and proudly showed it to me. I was impressed with his writing ability and told him so, but I loved him loving and missing his sister which I told him so! I think this Father-Son trip is good for their sibling relationship too!

We left the hotel and went on a driving excursion with friends before I had to go to the airport. On the way, the adults were having a lively discussion and Ethan was the only child in our car. He started putting his hand over my mouth and saying "Shhh Daddy!" After a few rounds of this interruption I asked, "Ethan, we're talking. Why don't you want Daddy to speak?" He looked up at me with large round eyes and patiently explained, "Because I want you to talk to me Daddy." 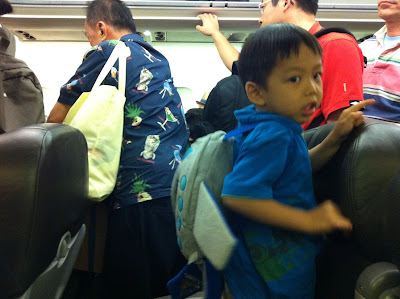 After a long flight we have finally arrived. I was exhausted cos when Ethan sleeps, I keep an eye to make sure he is safe. On the plane when I try to sleep I get prying fingers on my eyelids and a a cute voice saying, "Wake up Daddy! Don't sleep!" 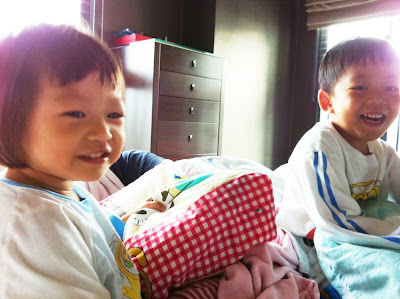 On the way back from Bali it was really sweet to hear Ethan talk a lot about his sister whom he said he missed. In fact he was rather disappointed to learn that she would be asleep when he got home and he could only talk to her in the morning. Peals of laughter could be heard the next morning and both of them raced into our room and climbed into our bed early in the morning in celebration of this joyous reunion!