After an early morning feed immediately followed by an early morning nap, we all roused ourselves to go down to Paragon for a half-day outing. We wanted to show Ethan the kiddy playground there. He loses out to the other kids of course, cos he's still too small. Though he had fun on the rubbery floor he still likes his seat on Daddy's shoulders the best! 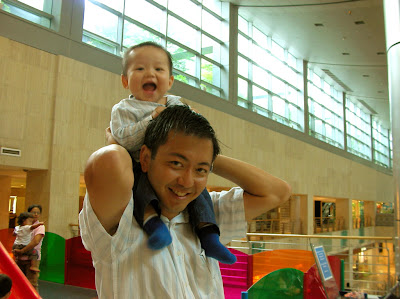 Lunch was at the Soup Spoon downstairs. Ethan gobbled up his pumpkin and rice porridge (from Mum's Kitchen) even before Daddy sat down with his soup! A passer-by helped us take this nice photo. 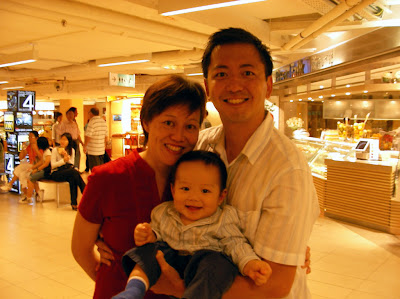 A bit of baby-biscuit shopping, and 15 min later we were in the car heading home and Ethan was out like a light. He's still snoozing now after his grand day out.
at 1:52 pm